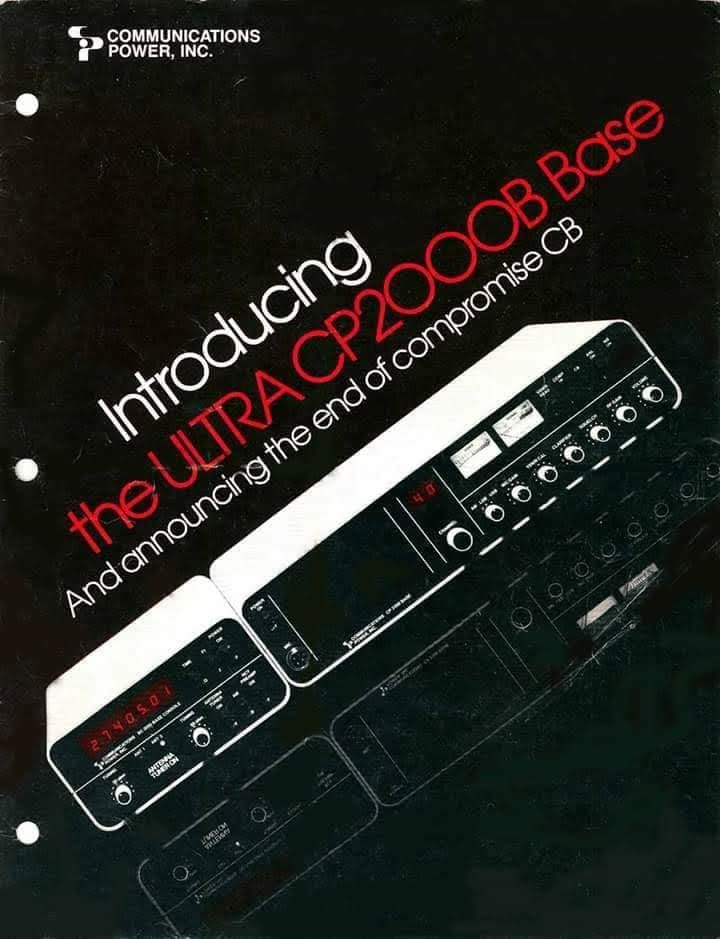 Bob Artigo and I founded Communications Power Inc. (CPI) in early 1975. Bob owned about 2/3 and I owned 1/3. Bob funded it originally from his payout when Communications Transistor Corp (CTC) was sold to Varian. He also guaranteed me a years salary ($24K including benefits). So, cutting me in for 1/3 was pretty fair! Palomar paid up front for the Digicom development and production, so that REALLY helped us get our own CPI s line product developed and into production. When I left in late 1978, Bob bought out my share. Steve Mieth and most of the engineering staff left about the same time. We all needed jobs and CPI could not afford us. A couple of months before I left, I had to layoff 50+ excellent manufacturing assemblers in one noon group meeting. It was the most difficult day of my entire 50+ year business career!”

The CPI CB Radio enthusiasts & owners group on Facebook is about the appreciation and maintenance of your beloved CPI CB radio and CPI accessories. If you have or want a CPI product CLICK HERE to JOIN!

Dave Wisherd “Thanks for letting me into the CPI CB Radio enthusiasts & owners group. I have finally retired at age 73 and this will help give me something interesting to do. It is great to see all the old CPI stuff and folks that enjoy it. Everyone at CPI was very proud of what we made and wanted it to be the best. In my over 60 years involved in radio, CPI was the most fun!”

This was CPI’s initial introduction of our own products in 1976, independent of Palomar and the Digicom 100 radio. Steve Mieth, seated in front of me in the lab photo, did the CP-300 design based on the original Digicom radio system but with major layout clean up. Also, we added a speech compressor, RF noise blanker, ANL for AM RX, and many others features. The FCC was on a very strong anti-mic gain control position then, so we had to throw in a Turner Power mic to add that function.

Later, with the CP-2000, we finally convinced the FCC that our unique AM modulation system would not allow over modulation RF frequency splatter=mic gain control. Another big change was to take 20 db out of the IF gain to reduce low signal audio volume/noise effects. I did the original Digicom RX gain based on my Motorola FM mobile radio where the radio is in full volume noise (180 db IF gain including 60 db of FM limiting) at low signal. Land mobile radios use tone squelch to make this unobjectionable.

In CB, nobody used the squelch and relied on lower audio level at weak signal for best listening. A basic design lesson here: understand your customer! After initial complaints, we also took fixed the Digicom.

Bob Arigo is also in the photo with Mary Spence, our HR manager. I have great memories of and deep appreciation for everybody in those photos.

Dave Wisherd: I finally decided to fire up my CP-400 which has been stored and unused since it was built in the Fall of 1978. It did not work, so I will change all the electrolytic caps and go from there. I have an FT-76 time/frequency counter which I have used for a desk clock since it was new (42 years). It still runs hot, but works. Maybe the old 10 degC higher = half life works for semis but not electrolytics? It should be fun to dive back in after all these years!

My test equipment is not exactly new stuff and was purchased used over the years. However, everything works well. The Agilent Network Analyzer is a godsend for playing with my new Bluetooth Dog Tracking Collar project. The Tek 500 MHz scope works great but I am thinking of getting a new digital scope. They really spoil you and have become much cheaper these days (China!)

Frank Woolfe Problem with that S meter too…

Dave Wisherd We used Nichicon electrolytics capacitors which were the best quality in those days. I actually do not know if that is the issue? It could be a cold solder joint or something else?

When I looked into the late build CP-400, I noticed that the VCO was changed from the original. I now remember that we had a mobile vibration microphonic issue when the SMO PCB was used in the CP-2500 chassis. We removed the coil shield, changed the ceramic disc caps to leaded monolithic types and potted the whole thing as shown in the photo. The module was used for all radios: CP-400, CP-2000 and the CP-2500, so we changed everything. This mod would not be needed for anything except the CP-2500.

Dave Wisherd Steve Mieth came up that fix. He was the Chief Engineer for all the radios from the CP300 to the CP2500. An OUTSTANDING engineer, he later worked for us at Spectrian where he led the effort for our UHF transmitter development for the Hughes PLRS tactical location system. It was one of our most successful programs. Later at WhereNet, he helped on antenna development for our 2.5 Ghz RF location system tags. He was also great guy and good friend who rebuilt Alfa Romeos and did ham moon bounce as hobbies. One of the most capable engineers that I ever had the good fortune to work with. A rare combination of first principle thinking and hands on execution.

Greg Campbell > Dave Wisherd one of my CP2000’s is like this and another has clear silicone, and when I was having issues with another CP2000 I noticed it had no potting at all on it. When touching in that area indicated it may need similar potting I did not want to use glue making repairs difficult or silicone that sweats acid on the components.

So I came up with the idea of packing around the area with something that is easily removed and wont corrode the components and worked perfectly ever since. Good old 3M BLU TACK did the job! Actually invented in 1969!

From Google – Bostik Blu-Tack® is a permanently plastic reusable material that can be used as a removable adhesive or to model with. It has excellent moulding qualities as it resists slump, will not shrink, dry out or harden and can be used over and over again

· Attached are manual (pre-Excel or even Lotus 1-2-3) spreadsheets for CPI product in late 1978. All CPI product suffered high labor cost as we could not afford an automatic insertion machine for PCB component stuffing.

Jim & Jack Callahan (good guys!) at Tram were still impressed as the original handwired D-201 tube unit was 40 hours of assembly labor alone vs. ~4 hours for the CP-2000. Today, an iPhone is less than a couple of minutes of hand labor! I notice that the CP-400 ($110 materials), FT-76 and FC-70 were missing on the Price Sheet. This was near the end of CPI and perhaps we were trimming the product line?

The CP-2000 introduction in the Fall of 1977 was a big success and financial windfall for CPI. We did a new radio each year with a Fall intro for leading into the main CB selling season. The CP-2500 was a great radio but the market for a VERY expense mobile CB was quite limited. I think that we probably sold less than 1000 of the CP-2500 = financial problems!

The FC-60 (6 vs. 7 digits) used an AMI chip and was much cheaper to make. The CP-2500 mobile speaker had an option to add an internal audio PA module (SP-1A). Note the punch out holes on the back. I think that we may have actually shipped some? If, so this would be the rarest of all CPI stuff. The Signal Power mobile antenna along with the Monitor Scope were prototyped but never made it to production. Both worked quite well but there was no money by then to put them into production.

Dave Wisherd replied to his own comment: “I remember that Bob Samsel, the lead design engineer, used a 5″ CRT with about 5 MHz BW? The unit detected the XMT RF envelope for modulation waveform. It did not have a spectrum analyzer function for checking the CB channels for activity. Today, a digital scope with LCD display could be used to directly look at the RF output waveform. Even better, the radio could be programmed to do a channel sweep and the scope could do a time-to -frequency conversion = channel activity monitor (poor man’s spectrum analyzer).” Upon a bit more memory recall, in my old age, the CRT was a 5UP1, a standard tube in those days.”